We are dealing with a gang of determined and well equipped criminals here. This is what happened at Ash Road:

On our site at Ash Road, Headingley, the thieves targeted almost every shed on our 9 acre site, so I would guess about 100 sheds entered in total.  Fortunately in most cases the thieves nearly opened doors and looked in, but in a substantial minority of cases there was ransacking of the shed contents.  I have certainly had reports of a rotavator and a couple of strimmers being taken – despite the fact that we warn people not to leave such items in their sheds. We had both our storage containers entered. We lost three petrol strimmers and a petrol hedge trimmer.

Note that they managed to get into locked sheds and two secure storage containers, causing serious damage in the process. At Parkside Road they broke the lock off the main gate, then drove a vehicle in. 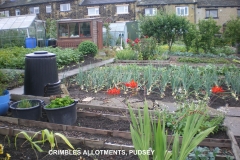